On average, your neighbors pay $117 a month.

We found that Farmers offers the cheapest home insurance rates in Nevada, with an average annual premium of $1,028. Cost is an important factor when comparing homeowners insurance companies, but the cheapest company isn’t always the best company. There are other considerations, such as coverage and customer satisfaction.

You won’t have to compromise on quality to take advantage of Farmers’ cheap premiums, as Farmers has an A rating from A.M. Best and a 3/5 rating from J.D. Power. A.M. Best's rating indicates that Farmers is financially stable, and therefore has sufficient money to pay out on claims. Even though Farmers didn't earn the highest numbers from A.M. Best and J.D. Power on our list, they are still respectable, especially when considering Farmers’ cheap home insurance rates.

We chose State Farm as our pick for best home and auto bundle in Nevada because they offer the largest savings at 34%, or $402 year. For the homeowner profile we used, State Farm’s competition offered less savings.

Bundling your home and auto policies is not only one of the best ways to save on your home insurance rates, but is also a big convenience. By combining multiple policies  with one company, you’ll only have to interact with one agent, as everything is under the same roof.

State Farm has the advantage of being the largest home insurer in Nevada, writing almost 20% of all policies, so you’ll likely be able to find an agent close to you. As a large insurance company, they can offer competitive rates. J.D. Power’s annual survey gave them high marks as well, with a 4/5.

In addition to Country Financial’s superb complaint index, its mobile apps for iOS and Android are well reviewed in the app stores. The simple interface lets you contact your representative, manage your billing options and view your insurance cards. If you have more than one insurance policy with Country Financial, they can all be managed together in the app.

Although J.D. Power only gives Country Financial a 3/5 for overall satisfaction (which means average), we think the combination of Country Financial’s complaint index, agents, mobile app and fair rates will leave customers happy.

USAA: Best for military service members and their family

USAA is only available to active military members, veterans and their families, but offers great homeowners insurance policies if you qualify. USAA is known for top-of-the-line customer satisfaction, military-friendly policies and bundling discounts.

Our research found that the cost of USAA home insurance in Nevada is above the state average at $1,769. But comparing insurance companies isn’t only about price. USAA’s high-quality coverage and customer service may outweigh its above-average cost. With a J.D. Power rating of 5/5 and complaint index of 0.26, USAA is a great option for those who qualify.

It's no wonder USAA is the fifth-largest home insurer in Nevada, as nearly 22,000 active duty members and 218,000 veterans live in the state, according to the U.S. Department of Veterans Affairs and the Office of the Secretary of Defense. That means that those who qualify for USAA work with a company that has a history of providing active military service members, veterans and their families with quality homeowners insurance.

The average cost of homeowners insurance in the state of Nevada is $1,408, or $117 dollars a month, based on our survey of nine home insurance companies. 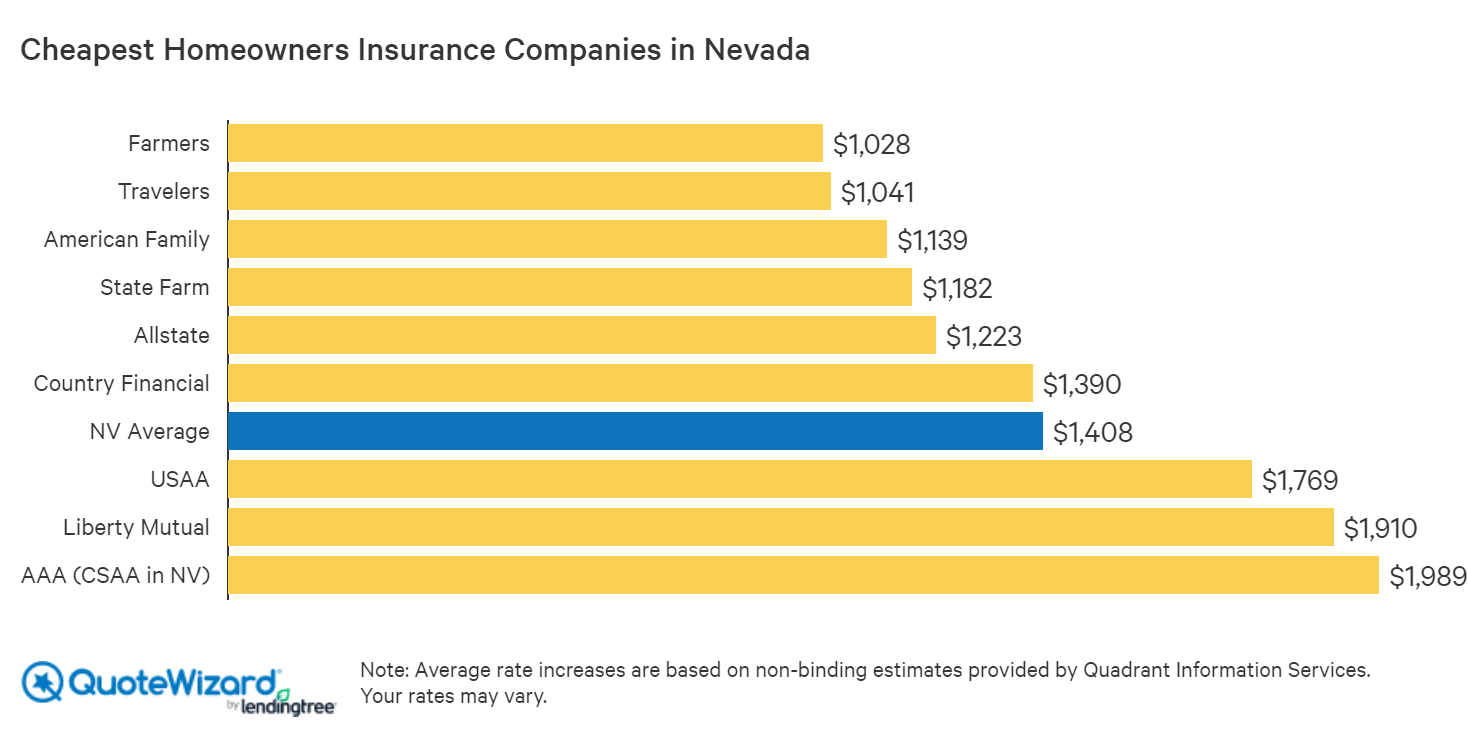 Nevada home insurance at a glance: the biggest and cheapest companies

Cost of homeowners insurance in Nevada by county

The cost of home insurance varies by county. Pershing enjoys the cheapest homeowners insurance rates in the state, at $1,273 a year. Clark County in the southeast has the most expensive home insurance premiums of $1,483 a year.

In comparison with many states, Nevada’s climate does not present a wide array of insurance perils. According to FEMA, there have been 77 natural disasters since 1953, with 54 of those disasters being fires.

The most frequent insurance peril in Nevada is fire – there have been 54 disasters involving fire in Nevada since 1953, according to FEMA. Most of these fires occur in the northwest corner of the state in Washoe County, including Reno, in the months of June, July and August.

Homeowners insurance policies usually cover loss from fire. However, some insurers may exclude fire from coverage in particularly high-risk areas. To make sure you’re covered, you should always check if you have cover for fire with your insurance company. Even if the fire does not stem from a wildfire, because Nevada is the driest state, fires that start in houses have a higher chance of spreading.

Some counties in Nevada have experienced flooding, mainly in the northwest corner of the state, and in the southeast corner in Clark County. Although flooding is not a large concern in Nevada, one bad flood can be costly.

The average cost of an NFIP flood insurance policy in Nevada is $721. Because Nevada has low flooding risk, you may be able to find a cheaper flood policy through a private flood insurance company. No area is immune from flooding.

1We collected quotes for a standard HO-3 home insurance policy from every ZIP code in Nevada. We included quotes from Farmers, Travelers, American Family, State Farm, Allstate, Country Financial, USAA, Liberty Mutual and CSAA (part of AAA) in our calculation of average rates across the state and Nevada counties.

The quotes we collected were for a 2,000-square-foot home worth $258,200 (the median home value in Nevada, according to 2017 U.S. Census estimate). Information about historical natural disasters in Nevada was sourced from FEMA.