On average, your neighbors pay $79 a month.

Despite being in the East Coast hurricane zone, Virginia home insurance rates tend to stay below the national average. Given the choices Virginia homeowners have, you'll want to compare quotes to see which insurer offers the best home insurance coverage for you.

State Farm has 17.6% of Virginia's home insurance market share. The insurer’s popularity across the country comes down to a combination of cost and customer satisfaction. Price-wise, State Farm has an average annual rate of $974 in Virginia. This is $77 below the statewide annual average of $1,051 and $241 below the national annual average of $1,215.

Nationwide may be a good choice if budget is a prime concern, but its customer care trends are mixed. Nationwide scored 0.24 on NAIC's Complaint Index, which is below both the state average of 0.27 and the National Complaint Index average of 1.0. However, Nationwide also scored a below-average two out of five in J.D. Power's 2019 home insurance customer satisfaction study. The graph below shows Nationwide's rates in Virginia's larger cities: 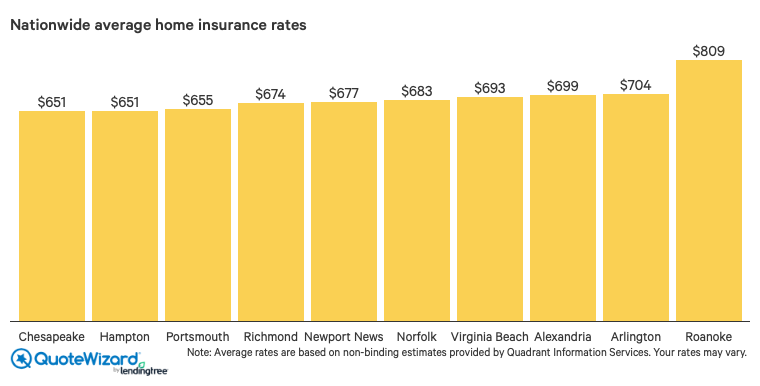 On top of low rates, Virginia Farm Bureau also has a strong reputation. The insurer was named one of the top 50 property and casualty insurance providers in the country in 2019 by the Ward Group, a top ranker of best practices in the insurance industry. Also, A.M. Best gave Virginia Farm Bureau an A- rating for financial strength, indicating a strong capability to back up claims against its policies.

As a coastal state, Virginia is at consistent risk for floods and hurricanes. These extreme weather factors often increase home insurance rates.

According to the Insurance Information Institute, Virginia is the sixth highest-risk state for storm surges, the high rising of sea levels that can lead to flooding. Standard home insurance does not cover flood damage, but you can get flood coverage through the National Flood Insurance Program (NFIP). NFIP flood insurance costs $61 a month on average in Virginia.

First Street's new calculation takes the rise in sea levels, creek floods and additional rainfall into account where FEMA does not.

In 2018, Virginia was hit by hurricanes Florence and Michael, both causing billions of dollars in property damage. The frequency of hurricanes in Virginia is a major factor in home insurance rates in the state, but most standard home insurance covers hurricane damage.

States across the East Coast require homeowners to have a hurricane deductible that could be higher than a standard homeowners insurance deductible. It is normally between 1% and 10% of the dwelling coverage amount. For example, if you have a $250,000 policy with a 5% hurricane deductible, you would pay the first $12,500 in damages before your home insurer would cover the rest.

QuoteWizard compiled and analyzed 1,871 quotes from seven of the top home insurance companies in Virginia. As a base profile, we used a home valued at $298,523 and built in 1981 as the median.