How Much Does Flood Insurance Cost? Averages by State and Zone (2022)

The average cost of flood insurance through the NFIP is $771 per year, but the amount you pay depends on your location.

The average cost of flood insurance through the National Flood Insurance Program (NFIP) is $771 a year, or $64 a month.

Since homeowners insurance does not cover flood damage to your home or belongings, flood insurance can provide valuable financial protection. Lenders usually require it for mortgages on homes in high-risk flood zones. It’s also worth considering in many situations when it’s not lender-required.

Here is a closer look at the estimated costs of NFIP flood insurance in each state and how Risk Rating 2.0, the new process for setting flood insurance premiums, may increase or reduce the amount you pay.

How much does flood insurance cost in my state?

The average cost of flood insurance ranges from $52 a month in Florida to $138 a month in Vermont.

Florida has the cheapest rates on flood insurance, $52 a month, which is slightly less than it costs in South Carolina, $53 a month, and Maryland, also $53 a month.

Most expensive states for flood insurance

Vermont has the most expensive flood insurance, $138 a month, followed by Connecticut, $125 a month, and Rhode Island, $122 a month. 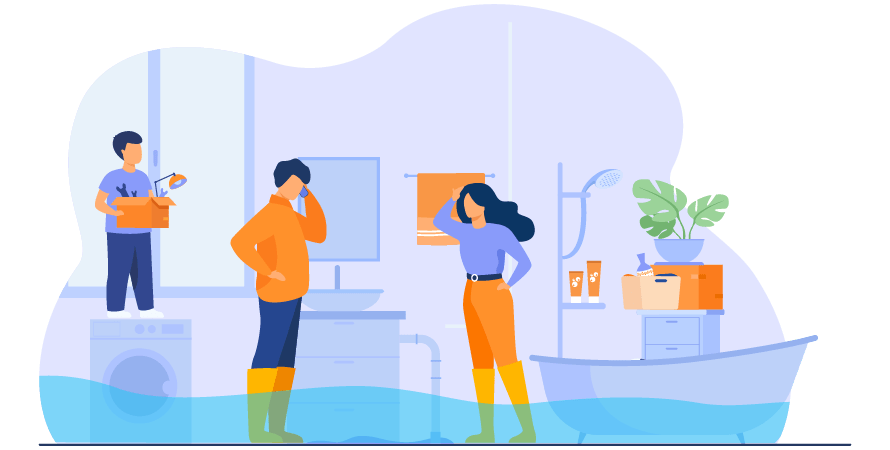 FEMA recently changed the way flood insurance is priced. On Oct. 1, 2021, the agency rolled out the first phase of Risk Rating 2.0, which was designed to bring more equitable pricing to flood insurance.

Under Risk Rating 2.0, the cost of flood insurance is primarily based on the cost of replacing a home and each property's unique flood risk.

Risk Rating 2.0 will use five main variables to determine a property’s flood risk:

Risk Rating 2.0 is changing the amounts that millions of Americans pay for flood insurance. More than five million people are currently insured through the NFIP. Nearly 80% of these policyholders will pay $10 to $100 more a month as their policies renew.

Around 1.2 million policyholders will immediately see a rate decrease of between $10 and $100 a month.

Our analysts also found that Hawaii, Texas and Mississippi have the highest percentages of policyholders who will see a price increase as the new rating system takes effect. Meanwhile, more than 50% of policyholders in Alaska, Michigan, Maryland and Utah will see their rates drop.

Risk Rating 2.0 went into effect for new policyholders on Oct. 1, 2021, and on renewals for existing policyholders beginning April 1, 2022.

Our team of analysts looked at the number of NFIP policies going back to March 2021. We found that 6% of policyholders nationwide have dropped their flood insurance. In some states, however, the number of property owners who have left the program is much higher.

What does flood insurance cover and do I need it?

If you have a mortgage on a home in a high-risk flood zone, as determined by FEMA’s extensive mapping system, your lender will probably require flood insurance.

If you don’t have a mortgage or your home is in a low- or moderate-risk flood zone, you can still purchase flood insurance on an optional basis, as long as your community participates in the NFIP. Most communities do.

Along with providing flood insurance, the NFIP works with communities to develop land-use policies and building codes that reduce flood risks.

If you are wondering why you should consider flood insurance if your lender does not require it, here are three statistics that FEMA frequently cites to answer this very question:

How does my flood zone impact my flood insurance rates?

Our analysis shows that NFIP flood insurance for homes in low- and moderate-risk areas is 45% less than it is for homes in SFHAs.

How much does flood insurance cost in Zone AE?

If you live in flood zone AE, the average cost of flood insurance is $971 as of March 2022, according to FEMA. If you live in a Special Hazard Area, such as zones AE or VE, and have a federally backed mortgage, you are required by the NFIP to have flood insurance. These areas are also known as 100-year floodplains, which means that the area has a 1% or greater chance of flooding every year. If you think that your zone is mapped incorrectly, you can file a letter of amendment requesting FEMA to review your zone.

Floods are one of the most common types of natural disasters in the country, according to FEMA. Louisiana, Texas and Florida see the highest number of claims through the NFIP. Even if you don't live in an area prone to flooding, you should still consider flood coverage.

In 2022, the total amount of payments of all flood claims amounted to over $150 million. That's a lot of coverage compared to how affordable flood insurance can be in high-risk areas. Here's how much money NFIP flood insurance policies have paid out by state in 2022 as of March.

How does private flood insurance work?

Here are a few potential advantages of private flood insurance over an NFIP policy:

How to save on flood insurance

Frequently asked questions about the cost of flood insurance

How much does flood insurance cost?

The average cost of flood insurance through the federally backed National Flood Insurance Program is $771 a year, or $64 a month.

What is replacement cost value in flood insurance?

Replacement cost value in flood insurance is the estimated price of repairing or rebuilding your home to like-new conditions. Replacement cost reflects the price of building materials and labor. It’s usually lower than your home’s market value, which includes your land, but more than actual cash value, which factors in depreciation.