How Much Is Flood Insurance in Texas? Averages by Zone

Protecting your home with flood insurance is important no matter where you live in Texas — and coverage is cheaper than you may think.

Flood insurance differs from other types of insurance in that most Americans get flood coverage through a government program, the National Flood Insurance Program (NFIP). Flood insurance in Texas costs an average $624 a year through the NFIP, according to our research.

Homeowners insurance does not cover flood damage, so we recommend that all Texans protect their homes with a separate flood insurance policy. Here's everything you need to know about the cost of flood insurance, getting quotes and requirements:

How much is flood insurance in Texas?

As the table above shows, one of the most important factors in determining flood insurance costs is your home's flood zone. To see how Texas compares to the rest of the nation, check out our study on the average cost of flood insurance in the U.S.

Every home is vulnerable to flood damage, no matter where it is located in Texas. However, certain areas are at particularly high risk. These are called Special Flood Hazard Areas (SFHAs). FEMA designates an area that has a 1% or greater chance of flooding in a given year as an SFHA.

SFHA flood zones begin with the letters “A” or “V”. You do not have to live along the Gulf Coast to be in an SFHA because severe flooding can be caused by the overflow of rivers, streams and rain. To find out which flood zone you live in, use FEMA's flood zone map.

Depending on the specifics of your home, such as whether you have a basement, your elevation and how much coverage you purchase, your flood rates may vary widely. In SFHAs, our study found that premiums can range from just over $1,000 to more than $4,000 per year.

For a complete list of writers of NFIP policies in Texas, see NFIP's flood insurance company list. Although you can get quotes from many companies, prices will not differ. Rates are set by FEMA, so no matter which company you get a quote from, you should receive the same quoted price.

Since Texas has a shoreline on the Gulf of Mexico, many homes are at risk of flooding. We also recommend that homeowners have flood insurance even if it is not required by federal law or your mortgage lender. Standard home insurance does not cover damage from floods. That means without a flood insurance policy, your home is not fully protected.

Hurricane Harvey caused more than $125 billion of damage in 2017. The devastation was not limited to homes in SFHAs.

Hurricane Harvey was one of the most devastating storms in U.S. history, but there have been other substantial flooding events in Texas. In 2019, tropical storm Imelda's flooding also caused serious damage in southeast Texas. According to the Texas Tribune, Imelda caused more than 41 inches of rainfall in certain areas, while Harvey's highest rainfall total was nearly 61 inches.

FEMA paid out more than $5 billion in NFIP flood insurance claims between 1996 and 2016 in Texas alone. That's the second-most number of claims in that time period, behind only Louisiana. As of March 31, there were already 306,974 claims made in 2021 in Texas that were closed with payments. 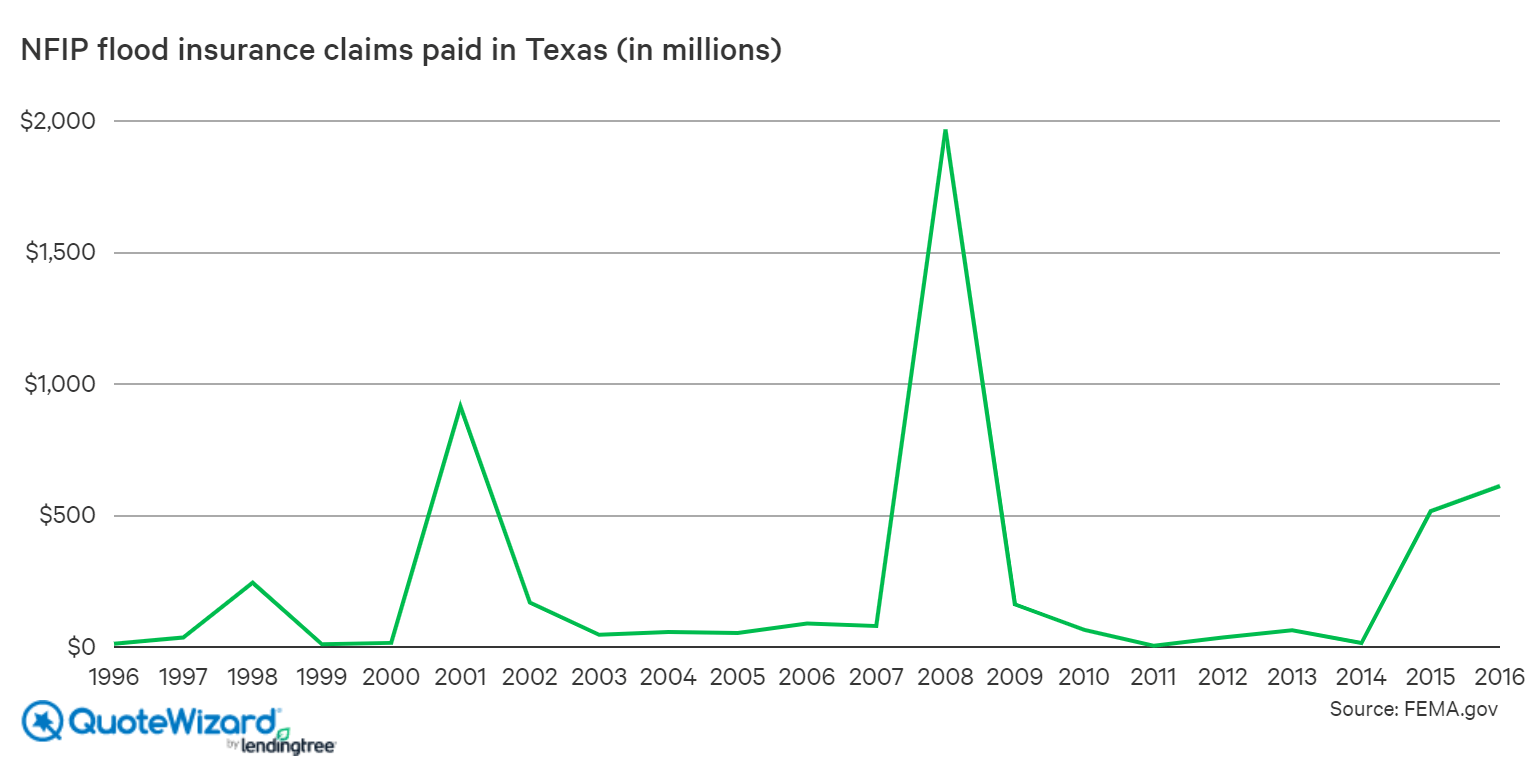 These figures represent the amount of money paid to policyholders of NFIP flood insurance, underlining how valuable flood insurance can be. While flooding may not be severe in a given year, catastrophic flooding events inevitably occur.