On average, your neighbors pay $79 a month.

The average cost of homeowners insurance in Pennsylvania is $945 a year, which is $270 below the national average of $1,215. To help you get your best rates and the right coverage for your needs, we studied the home insurance market in Pennsylvania to find the best companies. Here’s what we found:

How much does homeowners insurance cost in Pennsylvania?

Home insurance premiums in the Keystone State continue to rise every year. Pennsylvania residents can expect to pay $79 a month for home insurance, or $945 a year, which has increased from $913 a year in 2015.

Rates may vary between companies, which is why it’s always important to compare rates. Here’s how quotes from some of the biggest companies in Pennsylvania stack up. 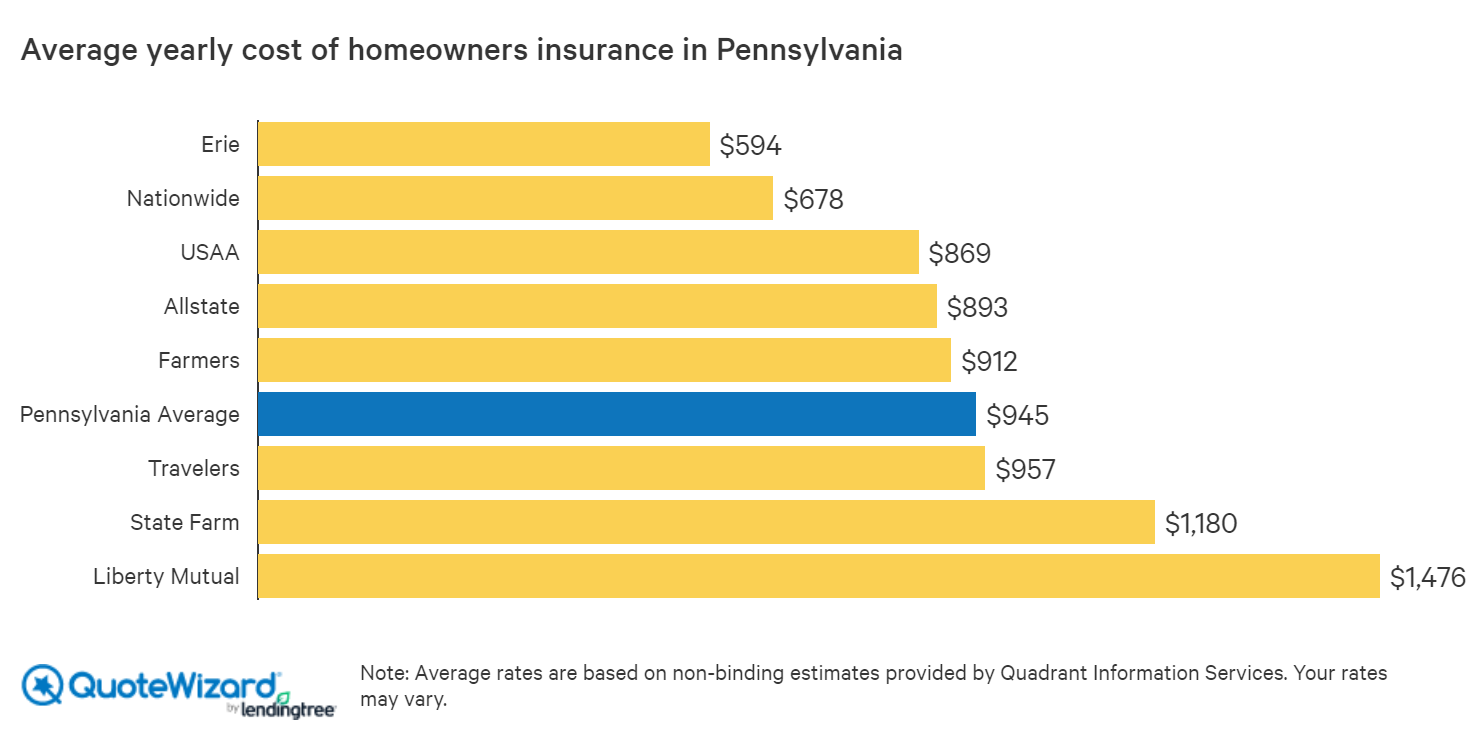 Erie, Nationwide, State Farm and USAA stood out as the best home insurance companies in Pennsylvania in our study. Here's why.

The homegrown Erie Insurance is our pick for the best value home insurer in Pennsylvania because it offers low rates, has excellent customer satisfaction and provides top-notch coverage. Started in 1925 in Pennsylvania, Erie has grown to be the second-largest insurer in the state, writing more than 15% of all home insurance policies.

Of all the companies we surveyed, Erie had the lowest annual premiums of $594, which is about $350 below the state average. You won’t have to sacrifice service to take advantage of Erie’s low rates either – Erie’s customer service is best in class. Erie earned a 5/5 for overall satisfaction in J.D. Power’s 2019 home insurance study, one of only three companies to do so. Additionally, Erie’s 2018 NAIC complaint index was 0.16, which is one of the lowest, and therefore best, numbers in the state.

Erie has more than 12,000 agents across 12 states and Washington, D.C., concentrated mainly in the Midwest and Mid-Atlantic. That means most Pennsylvania residents should be able to find a local agent. Erie has the advantages of a small insurer, such as local knowledge and personability, but is still the 10th largest home insurer in the U.S., giving you financial stability and brand familiarity.

Nationwide: our runner-up for cheapest rates

With an annual premium of $678, we couldn’t leave Nationwide off our list as an affordable option, even though Erie had the cheapest rates. For Nationwide’s low premiums, you’ll receive industry standard home insurance coverage, but its customer satisfaction may leave something to be desired.

Nationwide received a “below average” rating for overall satisfaction in J.D. Power’s 2019 home insurance survey, with a 2/5. It also had a NAIC complaint index of 0.24 in 2018, which is a respectable number (lower is better). The two largest insurers in the state, State Farm and Erie, had better complaint indexes in 2018, however.

We found that State Farm’s average annual home insurance rate was $1,180, which is above the state average. State Farm advertises on its website that new customers saved an average of $854 a year when they bundled home and auto insurance, indicating great value for people who switch. Bundling can save you lots of money, but there is never a guarantee. Shopping around is the only way to ensure you get the best price and right coverage for you.

Even if bundling won't always save you money, it simplifies your insurance bill. With both policies under one roof, you’ll only be dealing with one company. The bills aren't always rolled into a single payment, but you can always synchronize your payment days.

USAA: best for military service members and their families

USAA is our top pick for military service members, veterans and their families, thanks to its fair rates and high-quality service. In Pennsylvania, we found that USAA had below-average rates of $869. According to the U.S. Department of Veterans Affairs, there are more than 750,000 veterans living in Pennsylvania, or 6% of all state residents, meaning many Pennsylvanians can take advantage of USAA’s excellent service.

USAA was one of only three companies to receive a perfect 5/5 in overall satisfaction from J.D. Power’s 2019 home insurance survey. Additionally, it had a NAIC complaint index of 0.14 in 2018, which is the lowest index (and therefore best) complaint index we saw in the state. These two factors point to a customer experience well above average.

USAA’s coverage is designed to address military members’ and veterans’ unique insurance needs. For example, USAA covers damage to military uniforms, and personal property protection through home insurance applies in war zones, which is not normally the case.

Here’s a snapshot of the home insurance market in Pennsylvania.

For our national rankings, see QuoteWizard’s rankings of the best home insurance companies.

Rates in Pennsylvania vary from city to city. For example, Harrisburg residents enjoy rates under $900 a year, while Philadelphians pay over $1,400.

Here’s how home insurance premiums in Pennsylvania’s counties stack up.

Even though Pennsylvania doesn’t have the environmental risk factors of many coastal states, the climate still presents concerns for homeowners and insurers.

Pennsylvania experiences frigid winters, which can cause pipes to freeze. Homeowners insurance generally covers burst pipes, but not a burst pipe due to neglect, such as failing to heat your home adequately or lack of maintenance.

The entire state of Pennsylvania sees heavy snowfall in the winter, especially in northern cities and communities that have lake-effect snow. Snow accumulation can cause added strain to roofs and tree branches. Home insurance usually covers collapsed roofs and damage from falling trees, but it’s best to keep these clear to avoid filing a claim.

In addition to increasing environmental risk to your property, winter weather presents liability concerns. For example, what happens if someone slips on a sheet of ice on your property? The personal liability section of homeowners insurance should cover such an incident, but it's a winter risk to be aware of.

Pennsylvania averaged almost 18 a year between 2010 and 2018, according to the National Weather Service. However, most of them cause little to no damage, with EF-1 winds of 86-100 miles per hour.

Most home insurance policies cover damage to your property from tornadoes, but there are precautions you can take. For example, make sure your home is free from loose or damaged building components, such as loose shingles.

No area in the U.S. is immune to flooding. Although Pennsylvania has a lower flood risk, you may be able to find a cheap flood insurance policy through a private flood insurance company, as private companies have more advanced risk models than FEMA.

We aggregated quotes for every ZIP code in Pennsylvania from eight of the top insurers. We considered Allstate, Erie, Liberty Mutual, Nationwide, State Farm, Travelers, Farmers (Truck Insurance Exchange) and USAA. The collected quotes were for a home worth $190,137, built in 1965 and owned by a 57-year-old, as these are the median values in Pennsylvania.

We picked the companies for our study using S&P Global Market Intelligence, which ensures results as localized to Pennsylvania as possible. The largest subsidiary in Pennsylvania of every insurer was taken as representative for the company.