On average, your neighbors pay $87 a month.

Finding the right homeowners insurance company can save you money and give you peace of mind when disaster strikes. We ranked the top home insurance companies in North Carolina based on their average rates, coverage, customer service and availability to make your decision easier. These four companies stood out to us as great options:

Erie is our pick for the best overall homeowners insurance company in North Carolina due to its affordable rates, excellent customer service and coverage. We found that Erie's average home insurance rate is $1,031 a year, which is $18 below the state average.

Erie was one of only three companies to receive the maximum 5/5 in overall satisfaction from J.D. Power's home insurance survey. That indicates that Erie's customer experience is one of the best in the country and customers can expect above-average service. Affordable rates and great customer satisfaction won't come at the cost of full coverage — Erie provides the industry standard homeowners insurance, including coverage for:

North Carolina Farm Bureau requires a $25 annual membership fee, which increases its annual cost slightly, but we think that's a small price to pay for access to its insurance and banking products. Members can also enjoy discounts on maintenance and home services and Choice hotels, making it a great option for people looking to save money. 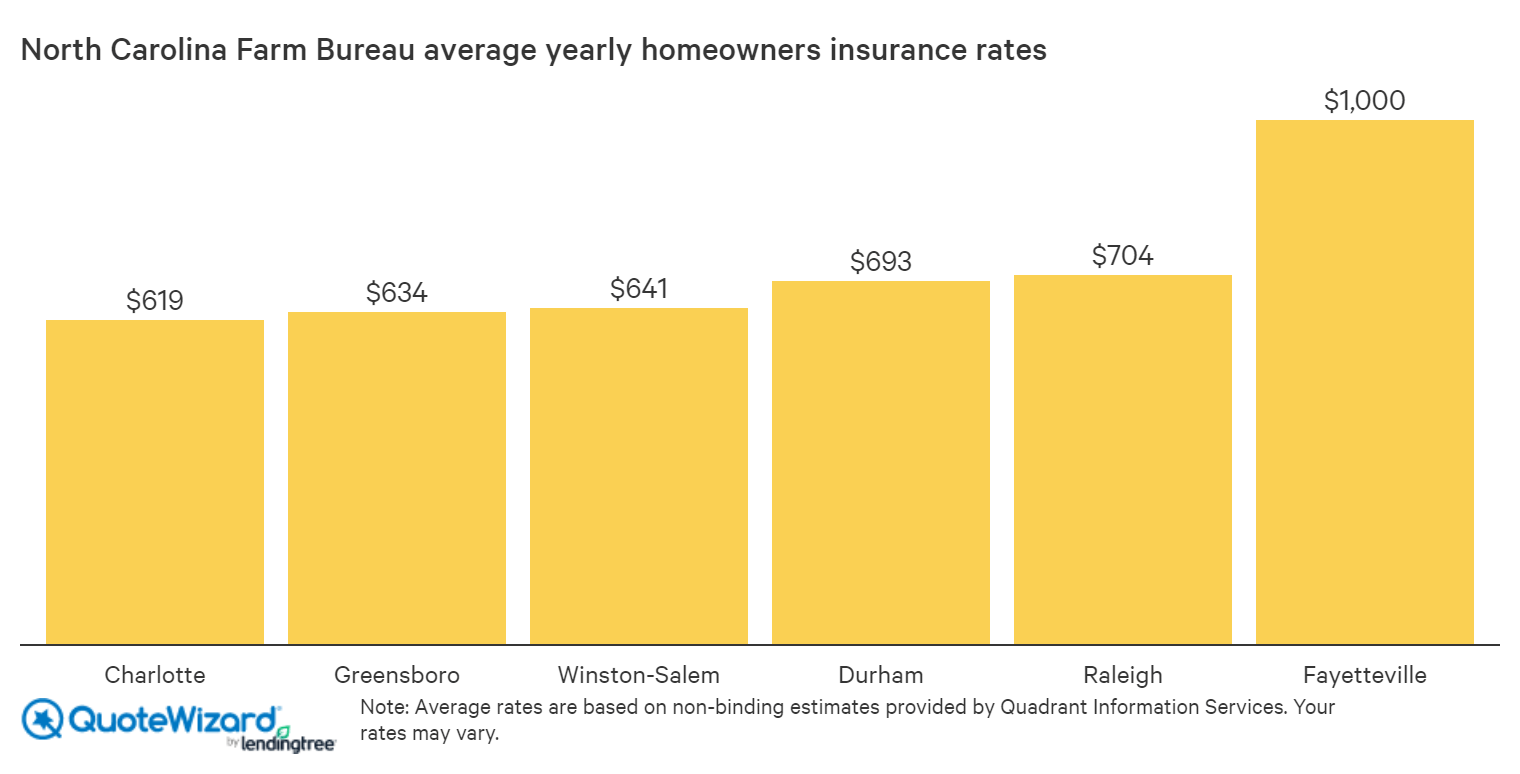 If you purchase your home and auto insurance from the same company, you should make sure both services are up to your standards. We like State Farm because it received a 4/5 in overall satisfaction from J.D. Power's home and auto insurance surveys — a strong showing for both types of insurance. Additionally, State Farm advertises average savings of $854 a year for customers who switched and bundled.

USAA insurance is only available to military members, veterans and their families. If you belong to one of these groups, USAA is one of your best options for homeowners insurance thanks to its fair rates, best-in-class customer service and coverage. With an average rate of $917 a year, which is 13% below the state average, USAA has some of the cheapest rates around.

You won't have to sacrifice customer satisfaction or coverage for USAA's cheap rates: USAA was the only company to receive the maximum 5/5 for every category in J.D. Power's home insurance survey. USAA's standard homeowners insurance policies go the extra mile, too. USAA covers active duty service members' uniforms and provides $5,000 of identity coverage in its standard policies, which is coverage we rarely see.

Knowing all of your options can help you find the best homeowners insurance company for you. The table below shows the most popular home insurers in North Carolina, so there's a good chance you'll find a local option on the list.

The average cost of homeowners insurance in North Carolina is $1,049 a year, according to our study of almost 2,000 quotes. That's below the national average of $1,215 by 14%, meaning North Carolinians enjoy savings of $168 a year compared to other Americans.

When it comes to finding the cheapest rates, choosing the right company is important. We saw rates ranging from $853 to over $1,500. Erie, Nationwide and State Farm hover around the North Carolina average of $1,049, while North Carolina Farm Bureau and Liberty Mutual come in with most affordable rates in the state.

Here are the average rates our study found for some of the top homeowners insurance companies in North Carolina.

Our study should help you estimate average rates, but the only way to know you're getting the cheapest rates you can is to compare quotes from multiple insurance companies.

Homeowners insurance rates tend to be more expensive in North Carolina's eastern areas, which have more exposure to hurricanes and storms off the Atlantic Ocean. For example, the coastal county of Carteret has the highest insurance rates in the state, at an average of $3,122 a year, followed closely by New Hanover.

Charlotte and Raleigh, the two largest cities in North Carolina, enjoy below-average rates because they are further inland. The average rate in Charlotte is 23% below the state average, at $806 a year, and Raleigh has similar rates — $824 a year on average.

But there are also substantial coastal populations in North Carolina that see significantly higher rates. Wilmington, for example, sees rates more than twice the state average, at $2,870 a year. Here are average rates for some of the biggest cities in North Carolina:

A standard HO-3 homeowners insurance policy includes coverage for windstorm and hail damage, however some companies exclude this protection in coastal and high-risk areas. In these instances, it's important to find wind and hail insurance elsewhere to make sure that your home is completely protected.

There are two primary options in North Carolina for people who cannot get homeowners insurance coverage through traditional channels: the Fair Access to Insurance Requirements (FAIR) plan and the Coastal Property Insurance Pool (CPIP).

The NC Joint Underwriting Association administers the FAIR plan and offers standard coverage everywhere outside of beach and coastal areas. FAIR plan homeowners insurance policies provide the same coverage as a regular insurance policy, with a handful of limitations.

FAIR plan insurance policies are intended as a last resort, and NCJUA often requires you to have tried and failed to get coverage through the standard channels. If you're having trouble getting coverage, we recommend working with your insurance agent to find coverage through NCJUA.

The NC Insurance Underwriting Association administers the Coastal Property Insurance Pool and is similar to the NCJUA, except in two primary ways:

Wind and hail only insurance policies through NCIUA are available to people who have an additional insurance policy that excludes windstorm coverage.

Homeowners insurance almost never covers flooding, meaning you'll have to get a separate flood insurance policy if you want coverage. Most people find flood insurance through the National Flood Insurance Program (NFIP), which is managed by FEMA. NFIP flood insurance is backed by the U.S. treasury but is administered by private insurance companies.

North Carolina has experienced some of the most severe flooding of any state: Between 1996 and 2016, North Carolinians received more than $800 million in flood insurance claims from the NFIP, which is the 7th highest amount of any state. While there are no regions in the U.S. completely immune to flooding, North Carolina is especially susceptible to flood.

We considered the top 20 home insurance companies in North Carolina in making our picks for the best in the state. We ranked companies based on their availability, coverage, affordability and customer satisfaction scores.

Our study aggregated 1,987 quotes from every ZIP code in North Carolina to find the average homeowners insurance rate in the state. We included the following companies in our analysis: Allstate, Erie, Liberty Mutual, MetLife, Nationwide, North Carolina Farm Bureau, State Farm and USAA. The sample quotes we analyzed were based on the median home value and build year of a single-family home in North Carolina. The policy specifications were as follows:

A: Homeowners insurance in North Carolina costs $1,049 a year on average, but rates vary between companies.

A: Usually, no. In order to have protection against flood damage, you'll have to purchase a flood insurance policy separate from your homeowners insurance.

Q: How can I get wind and hail insurance?

A: Many homeowners insurance policies cover windstorms and hail. However, if your home insurance company excludes those coverages, you can get coverage through the FAIR plan or Coastal Property Insurance Pool.