On average, your neighbors pay $103 a month.

Due to extreme winter weather, South Dakota's average home insurance rates tend to be higher than in other parts of the country. This can make looking for an affordable home insurance quote a bit of a chore. We're here to help with that.

The graph below shows how Auto-Owners’ average home insurance rates range across the biggest cities in South Dakota: 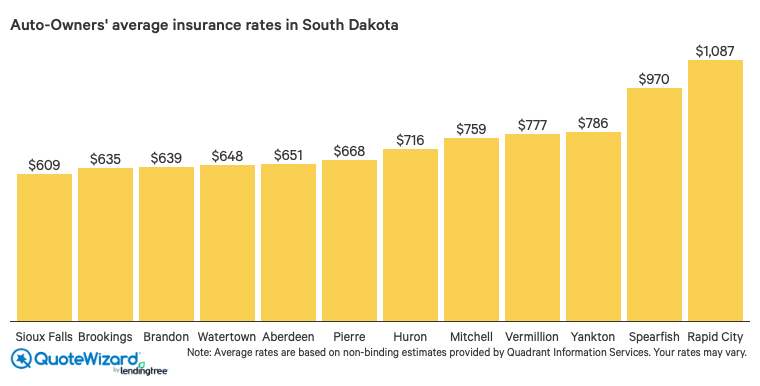 Farmers has an average annual home insurance rate in South Dakota of $891. This is $350 less than the state average of $1,241. The table below shows Farmers’ average rates in South Dakota's larger cities:

Farmers also offers ways to save even more on your home insurance premium. If you bundle home and auto insurance, you may save money on both policies. Talk with a Farmers agent to see what other discounts you may qualify for.

State Farm tends to have high popularity in most states, regardless of its average rates. A core reason for this is its reputation for claims resolution and satisfaction. J.D. Power gave State Farm a four-out-of-five ranking for overall satisfaction in its 2019 home insurance study. On top of that, NAIC gave State Farm a 0.20 Complaint Index rating.

According to the Census Bureau, South Dakota has the 12th highest population of veterans. Despite having one of the higher average annual home insurance rates in the state, at $1,388, USAA remains the best home isnurance for military members, both active and retired.

The table below compares the market share, overall customer satisfaction and Complaint Index ratings of the most popular home insurance companies in South Dakota:

QuoteWizard studied and compared 523 quotes from the top eight home insurance companies selling home insurance in South Dakota. As a base profile, we used a home valued at $189,690 and constructed in 1977 as the median.