On average, your neighbors pay $124 a month.

Rhode Island experiences hurricanes and flooding. This drives average home insurance costs high — almost 23% higher than the average national premium. While some home insurance companies offer competitive rates, finding the best one for you requires some shopping around.

We examined the homeowners insurance market in Rhode Island and checked out providers’ premiums, policy offerings and customer satisfaction history. Here are our best choices for home insurance companies in Rhode Island:

Additionally, NAIC gave Amica a 0.22 Complaint Index rating. The lower an insurer's complaint rating, the fewer complaints it has. The average Complaint Index in Rhode Island is 0.64, putting Amica well below the state average.

Allstate has an average home insurance cost of $764 in Rhode Island per year, almost half the state average of $1,489. As the graph below shows, the majority of Rhode Island cities fall under the state yearly average. 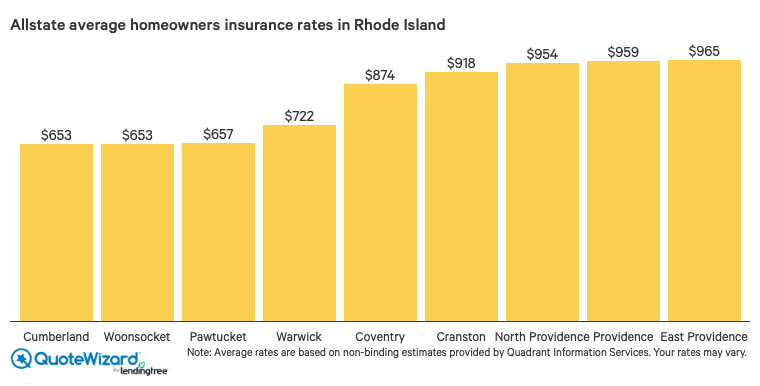 Allstate also maintains a decent rating of 0.29 on the NAIC Complaint Index. This puts the company below both the state average and national average Complaint Index of 1.0.

Price shouldn't be the sole reason to choose a home insurance company. However, if cost is a priority, before you buy a homeowners insurance policy, we definitely recommend looking into Allstate.

MetLife’s average home insurance rates in Rhode Island are $1,049 yearly, $440 below the state average premium. MetLife also offers discounts you may take advantage of, such as bundling an auto and home insurance policy. By bundling the two together, you can save as much as 10% off both premiums.

At 0.20, MetLife has one of the lower ratings on the NAIC Complaint Index in Rhode Island. With locations in 36 cities and towns in the state, MetLife makes it easy to find competitive home insurance quotes. Below are some examples of MetLife's rates in Rhode Island. If you're on a budget, look at home insurance rates between MetLife and Allstate in your area to see how their coverage compares.

According to the NOAA National Climatic Data Center, Rhode Island gets an average of 48 inches of rain a year, giving it the 13th highest precipitation rate in the country. This can lead to heavy flooding.

Unfortunately, home insurance doesn’t cover flood damage, but UPC can provide you with many flood insurance options. UPC takes part in FEMA's National Flood Insurance Program, and as an independent provider, it can offer NFIP coverage at a lower-than-average price. UPC also sells flood insurance for every flood zone type, so you can get the best flood coverage available.

The biggest home insurance companies in Rhode Island are a combination of big guns and smaller providers. The following chart shows the stats of the larger homeowners providers in Rhode Island, ranked by popularity.

The average yearly cost of home insurance in Rhode Island is $1,489. This is $274 above the national average homeowners insurance premium of $1,215. We calculated this rate from 108 quotes from seven of the top home insurers in Rhode Island.

In looking at the best homeowners insurance companies in Rhode Island, we found Allstate to have the cheapest annual rate, at $764, with MetLife the second cheapest, at $1,049. Liberty came in with the highest rate, at $2,768. Rhode Island's higher annual average home insurance premiums make comparing multiple quotes an important part of finding your best quote.

In addition to flooding, Rhode Island also suffers from hurricanes and blizzards. Home insurers consider extreme weather conditions to be high-risk factors. This is the most common reason for high home insurance rates.

According to the Insurance Information Institute, Rhode Island is the 13th highest-risk state for hurricane damage to homes. Standard home insurance usually covers hurricane damage, but you can mitigate it by reinforcing your roof, windows and doors.

Providence gets 36 inches of snow a year on average. This is well above the national average of 28 inches annually. Providence and other Rhode Island towns often bear the brunt of severe nor'easter storms that can cause immense damage to homes.

Home insurance often covers damage to the structure of homes and burst pipes that can occur after freezing. Although home insurance may cover such damage, you're better off trying to avoid damage in the first place. Make sure to remove snow from your roof during heavy storms, and let your faucets drip to keep them from freezing and cracking.

QuoteWizard compiled and analyzed 108 quotes from seven of the top home insurance companies in Rhode Island. As a base profile, we used a home valued at $292,009 and built in 1962 as the median.

The sample home insurance policy we got quotes for included these coverages: