On average, your neighbors pay $109 a month.

Tornadoes and flooding are frequent perils for homeowners in Arkansas. Having the right homeowners insurance can go a long way towards providing you with the protection you need to keep you and your home safe.

In looking at homeowners insurance options in Arkansas, we examined providers based on their average rates, customer satisfaction and coverage options. Based on our findings, these are the best home insurance companies in Arkansas:

State Farm has an average home insurance rate in Arkansas of $1,407 a year. Although this is $115 more than the state average of $1,292, State Farm still covers 26.2% of insured Arkansas homeowners despite its higher cost.

If you're looking for a homeowners insurance provider that focuses on Arkansas, we strongly recommend Arkansas Farm Bureau. They are an excellent local combo of below-average premiums and high customer satisfaction.

Arkansas Farm Bureau's average yearly home insurance premium is $1,230, $62 below the state average of $1,292. If you bundle a home insurance policy with auto insurance, you could save on both policies.

Farmers’ average yearly home insurance rate in Arkansas is $854, $438 below the state average rate of $1,230. A reason for this is the home insurance discount options that Farmers provides:

This is but a fraction of the money-saving options that Farmers provides. Farmers also has a claim forgiveness program. This means that if you're with Farmers for at least five years without a claim, your next claim wouldn't result in a rate increase. A claim on your home insurance policy may increase your premium. When you consider that a claim usually stays on your policy for three years, you can get an idea of how much of a savings this program may provide.

Farmers’ average home insurance rates are well below the state's average rate in larger cities. Starting at an average of $798 yearly in Springdale and going up to $995 in North Little Rock, Farmers is our main recommendation if low rates are your main priority. 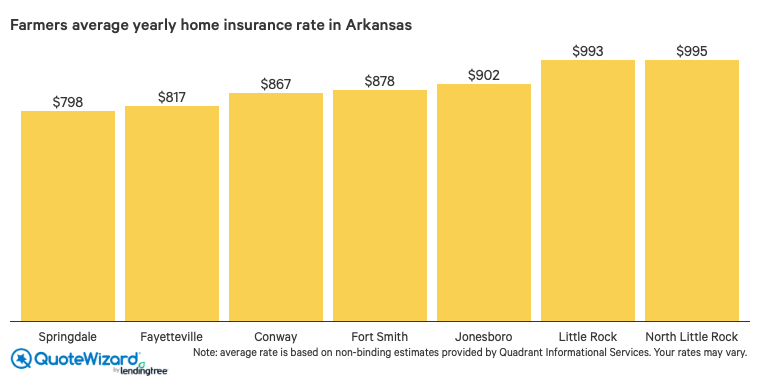 According to the Department of Veterans Affairs, 9.8% of Arkansas residents are military veterans. USAA focuses on providing insurance to veterans and their families. With below-average rates, a concentration on military members and a best-of-the-best customer satisfaction record, USAA is a top choice for Arkansas veterans.

The best homeowners insurance companies in Arkansas are a mix of nationally-recognized name brands and local mainstays. The following table shows the biggest home insurance providers ranked by popularity in Arkansas:

The average cost of home insurance in Arkansas is $1,292, just $77 above the national average of $1,215. This average rate was compiled from our study of over 1,000 quotes from seven of the top home insurers in the state.

Average rates are based on estimates by Quadrant Information Services. Your rates may vary.

In looking at the top Arkansas home insurance providers we studied, we found the cheapest average rates came from Farmers, at $854 yearly, and Shelter, at $1,150 yearly. While there are a few top home insurers below the Arkansas average rate, most of the big-name providers had rates significantly higher than the state average. State Farm comes in at $1,407 a year, $115 above the Arkansas average rate, going up to Auto-Owners at $402 above the state average, at $1,694 yearly.

Average rates are based on estimates provided by Quadrant Information Services. Your rates may vary.

A key reason for Arkansas' higher-than-average home insurance costs are the weather threats that are all too common there. The frequency of flooding and tornadoes that occur in Arkansas make for a high-risk insurance threat.

The Arkansas River flooded in the summer of 2019, causing an estimated $3 billion in damages. The threat of flooding in Arkansas is made worse by the fact that flood damage isn't typically covered by home insurance. You can get flood insurance through FEMA's NFIP program. NFIP flood insurance can be purchased through Arkansas home insurance providers who take part in the NFIP program, as well as some independent insurers.

According to the National Weather Service, Arkansas experienced 33 tornadoes in 2019, which is slightly higher than the state average of 32 tornadoes a year. Tornadoes can cause extensive damage to the windows, siding and roof of a home, potentially costing tens of thousands of dollars to repair.

Tornado damage is usually covered by home insurance. You'll want to make sure your policy limits are sufficient for full replacement if necessary. If damages due to a tornado exceed your coverage limits, the remainder of the damage needs to be paid out of pocket.

QuoteWizard compiled and analyzed 1,039 quotes from seven of the top homeowners insurance companies in Arkansas. As a base profile, we used a home valued at $141,204 and built in 1983 as the median.

The home insurance policy we rated included standard coverage amounts based on $141,204 in dwelling coverage and a $1,000 deductible: