In their first week in office, the Biden administration has made it clear that clean energy is a top priority. Partnering with leading environmental groups, the Clean Cars For America proposal, was crafted as a goal to bring clean air for future generations while bringing more jobs to American auto workers and manufacturers. The plan includes major investments in automobile infrastructure, including more than 500,000 electric vehicle charging stations by the end of 2030, and jobs in industries supporting vehicle electrification with special emphasis on the Electric Vehicle Infrastructure Training Program (EVITP).

To see which states are leading the adoption of electric vehicles and alternative fuel infrastructure, analysts at QuoteWizard evaluated the following factors:

As could be expected, California is at the forefront of electric vehicle usage, representing 47% of the total number of EVs on the roads in America. California maintains 24% of the nation's alternative fueling stations and 33% of electric charging outlets. 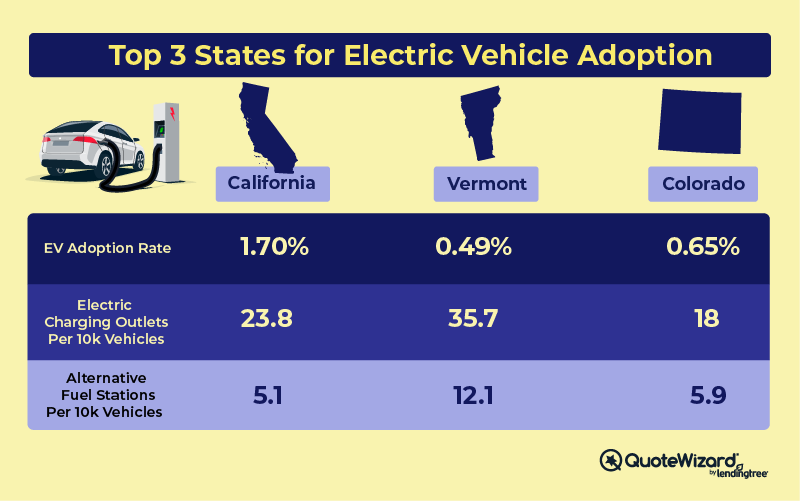 With Tesla now leading the way in EV production, the supply and demand of EVs are higher than ever. Electric cars have been considered a luxury since their invention, as their costs were high and few were manufactured. In 2020, Tesla produced 499,550 EVs across its factories worldwide. Before we see widespread adoption of EVs in the U.S., they will have to be considered the new standard of vehicle by the automotive industry and federal government. Charging and outlet availability and increased infrastructure support will help promote EV adoption. With the current 0.49% national adoption rate of electric vehicles, there is a lot of room to grow.

Benefits of owning an electric vehicle

Due to costly repairs, expensive technologies and overall higher price tags, electric vehicles are typically much higher to insure than the average car. Insurance companies will charge you extra for driving a luxury vehicle, which could change with their becoming more popular.

There are currently 47 federal incentives to purchase electric vehicles, which includes grants, tax breaks, loans and leases, rebates, credits, exemptions and other programs in the country. Nationally, around 627 state-funded incentives exist. California has the most, with 94 state incentives (72 more than second-ranked Colorado).

The hope is that more incentives towards manufacturers and consumers will persuade Americans to swap out older, environmentally unfriendly and less-efficient vehicles for more energy-and consumer-efficient options. According to our findings, states that offer the most EV incentives generally have the highest adoption rates.

QuoteWizard wanted to find which states are the most electric vehicle (EV) friendly and have adopted green energy infrastructure for vehicles the most so far. To do so, we analyzed the U.S. Department of Energy data and ranked all 50 states based on a composite rank scoring system. The four factors that we used in the ranking system were EV adoption rates, alternative fueling station rates, charging outlets rates and number of incentives per state. States ranked closer to 1 are the more EV friendly and adoptive, while states closer to 50 are the slowest to adopt to EV and its infrastructure.

To find the states that have the highest EV adoption rates for the first factor, we compared the number of electric vehicle registrations to the number of total motor vehicles per state from the U.S. Department of Transportation Federal Highway Administration (FHWA).

To find states that have the highest rates of alternative fueling stations, we compiled the number of public and private electric charging stations, biodiesel (B20 and above) and hydrogen stations for all owner types from the U.S. Department of Energy Fueling Station Locator and compared those numbers with vehicle registrations from the FHWA. Charging outlets were ranked based on the highest number of electric charging stations per 10K registered vehicles.

For incentives, the National Renewable Energy Laboratory (NREL) maintains a database of state and federal laws and incentives related to alternative fuels and vehicles, air quality, vehicle efficiency and other transportation-related topics. Incentives include grants, tax breaks, loans and leases, rebates, exemptions, and more. States with the most incentives received a lower (better) score.