Your neighbors pay as little as $44 a month.

Homeowners insurance can help protect New Yorkers’ homes from the long, cold winters and Atlantic storms. But finding the best home insurance company is difficult, so we ranked the top companies in New York to help you find the right coverage at an affordable rate.

After ranking the top home insurance companies in New York based on affordability, coverage, customer satisfaction and availability, these companies emerged as great options:

Customers don’t have to sacrifice customer service or coverage for State Farm’s affordable rates: Its overall satisfaction score was 4/5 in J.D. Power’s 2019 home insurance study, suggesting its customer service is above-average. Additionally, State Farm provides the base level of coverage homeowners expect, including protection for:

NYCM has the cheapest rates we saw in New York, with an average of $529 a year for coverage. This makes NYCM a good option for homeowners looking to save money on their insurance. NYCM is a small, regional insurer that has served New Yorkers since 1899.

For many homeowners across New York’s diverse landscapes and cities, NYCM remains a cheap option. Here are average rates for some of New York state’s most populous areas. 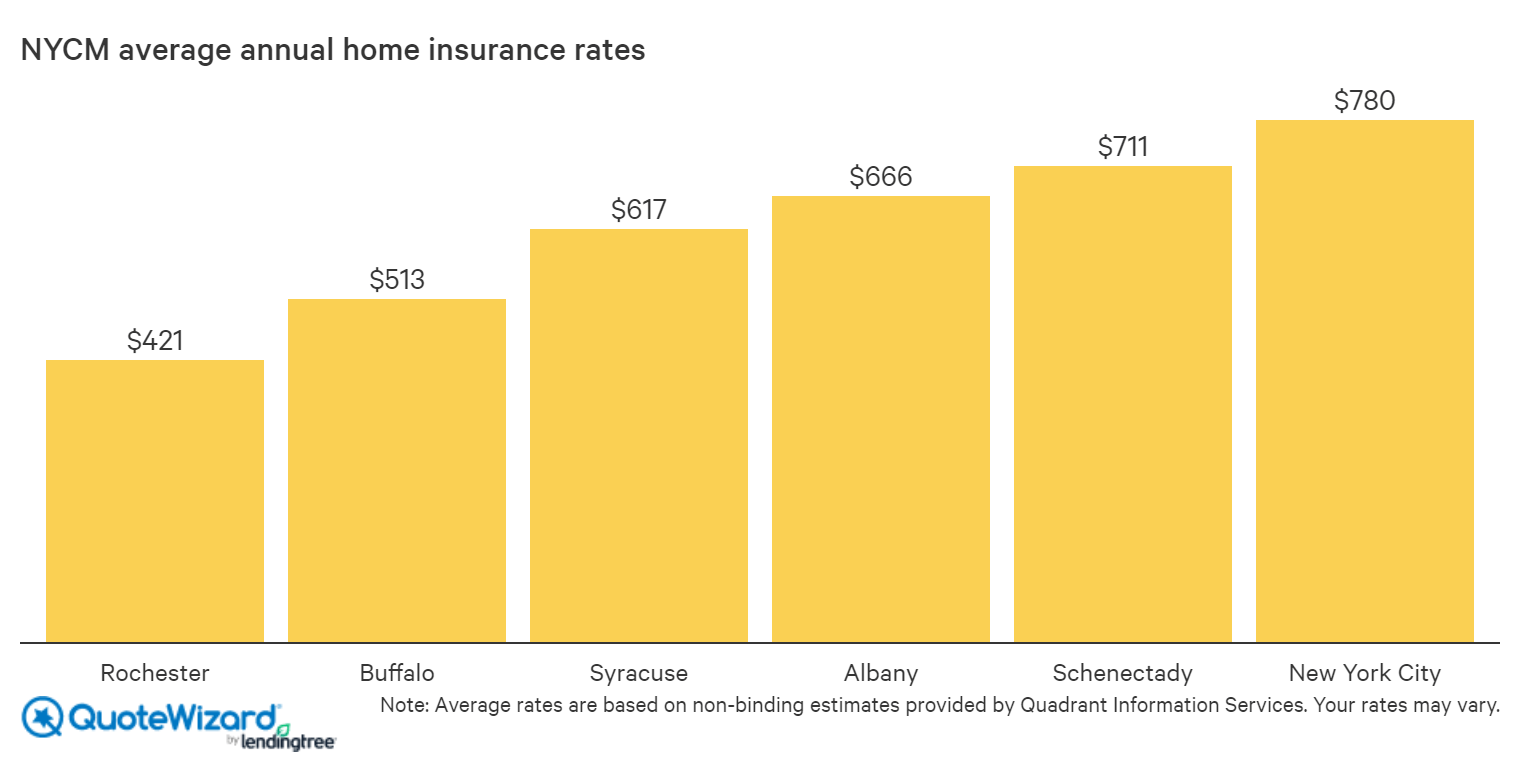 Allstate is the largest home insurance company in New York, but it makes our list for reasons besides its widespread availability — Allstate offers good coverage and customer satisfaction, although its rates are a little high for the state. Our study found that Allstate’s average rate is $1,443 a year, which is $200 above the state average.

Allstate received a 3/5 in overall satisfaction from J.D. Power, which is an average rating. Its NAIC Complaint Index, which measures how many complaints a company receives, was 0.57 in 2018. That’s below the national average of 1.00 (and therefore better). These factors, combined with its rates, point to a decent all-around experience.

USAA insurance and banking are only available to military service members, veterans and their families. We think USAA is the best home insurance company for those who qualify because of its affordable rates, better-than-average coverage and best-in-class customer service. New York state is home to more than 700,000 veterans according to the Department of Veterans Affairs, meaning many New Yorkers can take advantage of USAA’s products.

Our study found that USAA’s average annual rate in New York is $1,072, 14% below the state average. USAA was one of three companies to receive the maximum 5/5 rating for overall satisfaction according to J.D. Power, indicating a high level of service. One of the standout coverages of USAA home insurance is $5,000 of identity theft protection standard — we usually see identity theft coverage as an add-on.

The majority of New York state’s landmass is not coastal, but residents of New York City and Long Island know how devastating Atlantic hurricanes and storm surge can be. We recommend Narragansett Bay (NBIC) for coastal homeowners in New York because it specializes in coastal properties.

The availability of home insurance companies varies state-to-state, and New York is no different. While large national companies like Allstate, State Farm and Liberty Mutual have a strong presence, there are also regional options like Adirondack, NYCM and Narragansett Bay.

The cost of homeowners insurance varies between companies, however. The graph below shows averages for some of the most popular companies in New York. We saw average rates as cheap as $529 a year with NYCM and as high as $1,911 with Liberty Mutual.

Because of the large cost differences between companies, we recommend comparing quotes from multiple home insurance companies. It’s a great way to find the best rates for you.

Location is a major factor in determining home insurance rates because some cities face risks that others don’t. In New York, the most expensive rates are downstate on Long Island and in New York City. That’s in large part thanks to exposure to Atlantic storms.

Northern counties and cities in New York tend to have cheaper rates. Buffalo, for example, enjoys rates 13% below the state average, while Brentwood in Long Island experiences rates 75% above the state average.

Many events can damage your home, but the primary concerns for homeowners in New York are the snowy winters for upstate New Yorkers, and flooding and hurricanes for New Yorkers on the coast.

No matter where you live in the state, New York experiences cold, snowy winters. Homeowners insurance often covers many of the events associated with winter, such as collapse from snow accumulation and burst pipes.

Nevertheless, there are a few precautions you can take to prevent a claim in the first place. Keep your walkways and roof clear of snow to guard against collapse. It’s also important to keep your home well-heated, even when you aren’t home, to prevent plumbing freezes.

Residents of downstate New York like New York City, Westchester and Long Island are exposed to hurricanes off the Atlantic Ocean. Home insurance does not cover all the damage hurricanes can bring — it almost always excludes coverage from flooding. Flood insurance is a separate policy usually, which homeowners can purchase through a government program or private insurer.

The wind damage associated with hurricanes is usually covered by home insurance, however. That means home insurance provides some protection, but not all the protection that homeowners should have.

Q: How much does home insurance cost in New York?

A: Homeowners insurance costs $1,243 a year in New York, on average. However, rates vary between companies, so we recommend getting multiple quotes.

A: There is no single best company, but our study found that State Farm is the best for many people.

A: Homeowners insurance does not cover flooding. For coverage, you'll have to purchase flood insurance separately.

A: Home insurance is not required by law in New York, but it is often required as a condition of home loans. So if you have a mortgage, it's likely your lender will require homeowners insurance.

We created a sample home based on the median value and build year of homes in New York — $341,371 and 1960, respectively. We then used the following policy specifications:

We used S&P Global to gather demographic, geographic and market data and statistics.