On average, your neighbors pay $81 a month.

Alaska is the biggest U.S. state geographically, but has the 3rd smallest population. The 49th state's geography is as varied as it is beautiful. Alaska experiences extremely cold temperatures and high levels of precipitation, presenting unique homeowners insurance hazards.

The average cost of homeowners insurance in Alaska is $974, which is right below the national average of $1,192. Alaska's home insurance premiums are the 34th most expensive in the U.S.

Alaska has enjoyed relatively stable and occasionally decreasing homeowners insurance costs, even as some states have seen their premiums rise. Alaska home insurance rates rose from $942 in 2012 to $974 in 2016, an increase of $32 dollars, or 3.4%. The graph below shows the change in average home insurance rates in Alaska from 2012 to 2016. 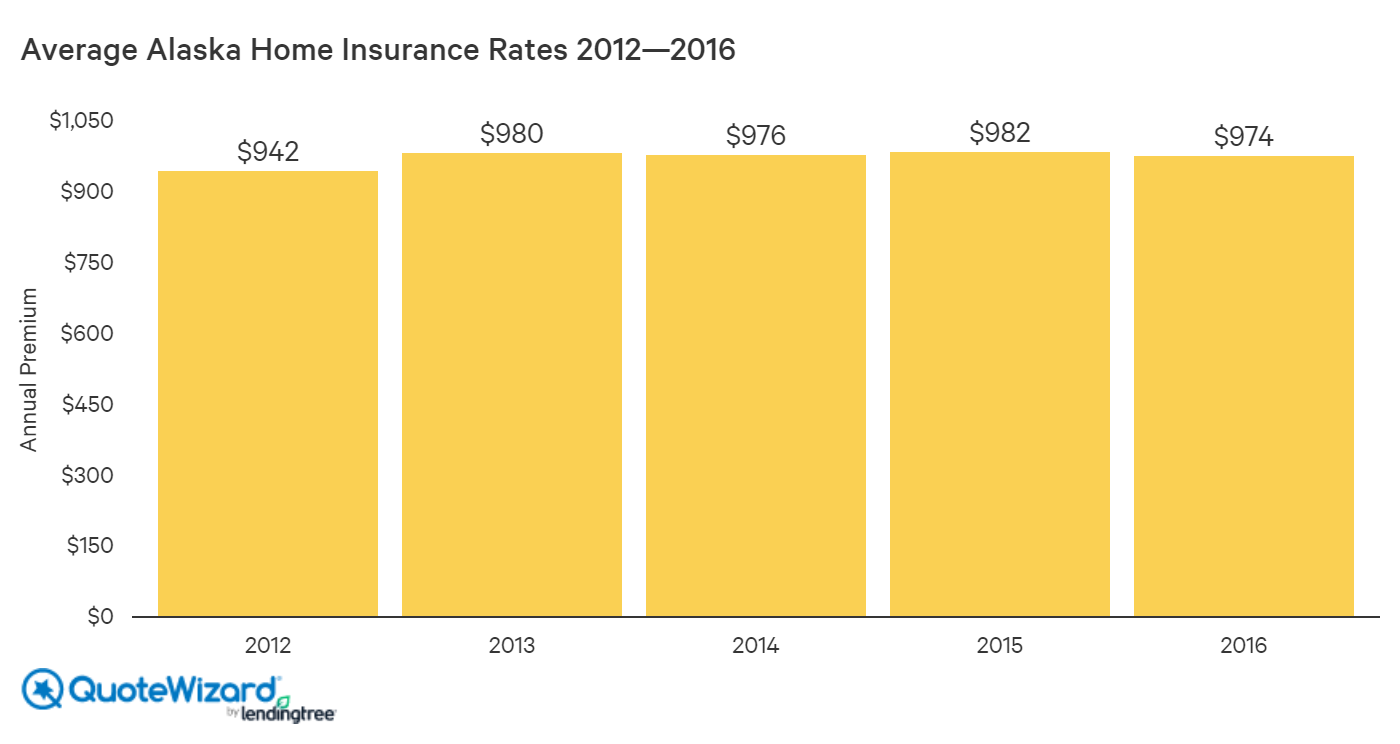 While the state average can help you ballpark where your rates should be, premiums will nevertheless differ between insurers. The best way to get the cheapest rates is to compare home insurance quotes in Alaska from multiple companies.

In 2018, these were the most common home insurance companies reported by QuoteWizard users living in the state of Alaska.

The above list shows Alaska's most popular home insurers according to our users. But popular doesn't always mean best.

Our study on the best home insurance companies focuses on top of the line companies. We judged insurers based on many criteria, including customer satisfaction, awards, financial stability and coverage. These companies stand out among the rest:

Insurance markets vary greatly state-to-state. Below is a snapshot of Alaska's unique profile.

It's rare to see a small insurer like Umialik control such a large share of the home insurance market. Umialik earns an A+ rating in financial strength from AM Best, indicating that their economic outlook is stable. Authorized to operate since 1981 and headquartered in Anchorage, Umialik is in tune with the specific needs of Alaskans. Umialik is part of Western National Insurance Group and has also expanded outside of Alaska, serving 19 total states.

Insurance providers consider an array of factors in determining your premium. Some are characteristics of your home, like its age and structure. Others relate to the particulars of your geographic area, like crime rates or frequency and severity of natural disasters. Here are some of the factors that affect the cost of homeowners insurance in Alaska.

Alaska's environmental hazards are diverse, due to its size, variety of weather and terrain, and geographic location. Cold winters are probably the best-known feature of Alaska's climate, but precipitation and seismic activity can be just as severe.

Extremely cold and snowy winters: Alaska's winters bring new meaning to the word "freezing." In 1971, it set the record for the coldest ever temperature in the U.S., at -80 degrees. This puts homeowners at risk of frozen pipes and ice dams. Most home insurance policies will cover these perils if you have taken reasonable precautions to prevent them. You should make sure your insurer does not exclude burst pipes.

Rain and flooding: Some parts of Alaska receive unusually large amounts of precipitation. The southeast region of Alaska gets the most rain. Rain can cause flooding, especially in conjunction with melting snow in the summer. It is important to note that regular home insurance does not cover flooding; the only way to obtain flood insurance is through the National Flood Insurance Program or a private insurer.

Heat waves and drought: Despite freezing winters and an extremely northern location, Alaska's summers are occasionally marked by heat waves and drought, forming a deadly combination: wildfires. Between April and July of 2015, over 2.4 million acres in Alaska burned. Not all home insurance policies will cover wildfires, and insurers are less likely to write policies including the coverage in fire-prone areas. Be sure to ask your agent if your policy includes protection from wildfires.

Earthquakes: Alaska is the most seismically active state, as it sits at the border between the North American and Pacific plates. Seismic activity occurs daily but is usually unnoticeable. Earthquakes can be dangerous to the structure of your home, however most home insurance policies do not cover earthquakes. Due to the frequency of earthquakes in Alaska, Alaskans should consider purchasing earthquake insurance.