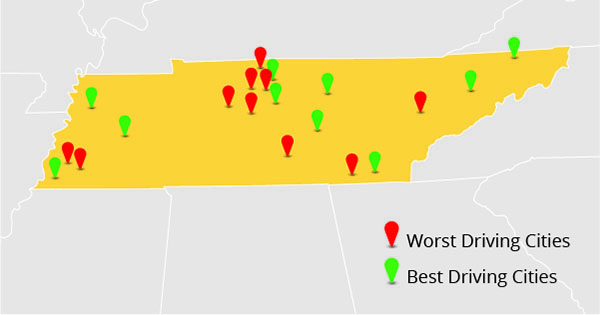 We've all heard the line from the classic country song, Wagon Wheel: "He's a-heading west from the Cumberland gap to Johnson City, Tennessee." However, that fella heading to Johnson City had "had a nice long toke." The famous ditty recites a story about driving, albeit driving high, through the Volunteer State.

Makes you wonder about the overall driver quality in the state. According to QuoteWizard best and worst driver studies, Tennessee ranks right in the middle of the pack. Tennessee ranked 27th worst driving state in 2018. Not bad, but not great. According to NHTSA road fatality data, Tennessee’s 15.49 crash fatalities per 100,000 rates well above the national average of 11.40. Tennessee did outperform neighbors to the north, Kentucky in this category. Kentucky tallied 17.56 road fatalities per 100,000 drivers. Neighbors to the south, Mississippi and Alabama also had higher fatality rates than Tennessee, 23.12 and 19.45 respectively.

Our team of auto analysts set out to discover which Tennessee cities have the best drivers and which cities are home to the worst. We put together a ranking of the 50 largest cities in Tennessee by overall driver quality. We analyzed over 90,000 insurance quotes from Tennessee drivers using QuoteWizard.com and ranked cities by the highest rate of incidents. Incidents include accidents, speeding tickets, DUIs, and citations.

Heading west on I-40 from Nashville, you'll run right into Tennessee's worst drivers in the city of Dickson. Being a smaller suburban city, the town has a good amount of traffic flowing through. Folks traveling west on I-40 to Memphis and south on highway 48 from Clarksville are likely contributors. Dickson and it's namesake county had 16 road fatalities in 2017, which was 30.27 road deaths per 100,000 — one of the highest fatality rates in the state.

Arlington's profile is almost identical to those of Dickson and Franklin. It resides on a busy highway right outside of a big city — this time, Memphis. With I-40 also passing through Arlington, you've got to wonder why bad drivers are always on I-40. Shelby County accounted for a road fatality rate of 13.02 per 100,000 people in 2017.

This time heading north on I-65 from Nashville, you'll hit your third worst driving city in the state. Portland profiles as a more of small town with only 11,000 residents and less of a busy traffic city. However, it’s poor rating in driver quality lends itself to a populus of bad drivers. Sumner county accounted for 5.45 road fatalities per 100,000 residents. A much smaller figure than their bad driving counterparts Dickson and Arlington.

Just south of its bad driving neighbor, Lakeland, is Germantown taking the top spot of the best drivers in Tennessee. Germantown is situated in the perfect spot for a city with safe drivers: only one highway going through town and the rest of the roads, arterial. Folks in Germantown take 'er real easy on the roads, and the numbers back it up. Another city in Shelby County, you'd assume it's the Germantown drivers keeping the road fatality rate of 13.02 below the state average.

Unlike Germantown, Gallatin is a highway intersection hub. With all the highway traffic going through the city, we have to commend the Gallatin locals on their terrific driving despite the extra traffic. Given the city lives on the Cumberland River, there might be an extra layer of caution when navigating roads along the waterfront. Sumner County's road fatality rate of 5.45 per 100,000 people falls among the lowest in the state.

Dyersburg fits the mold when it comes to safe driving cities. It's a small town of less than 20,000 with very little highway traffic passing through. Not only that, Dyersburg looks like a town that's never in a rush. The folks here drive the 30 mph speed limit keeping everyone incident free. While our data shows how safe Dyersburg drivers are, NHTSA figures show Dyer County to have 24.02 road fatalities per 100,000 people.

The QuoteWizard research team evaluated driver quality from the 50 largest cities in Tennessee by population. We analyzed 2018 data of over 90,000 insurance quotes from Tennessee drivers using QuoteWizard to find the rate of overall incidents in each city. Incidents include accidents, speeding tickets, DUIs, and citations.