Back to Top
Health

States Experiencing the Most Anxiety or Depression During the Pandemic

Anxiety and depression rates have skyrocketed at an increased rate of 6.3% since the United States saw its first cases of COVID-19 in early 2020. Many factors could have contributed to these feelings, such as a national increase of mortality due to COVID-19, state-mandated stay-at-home orders with social restriction and increased isolation, and pandemic-related job loss. According to a Mental Health America survey, from April to September 2020, among people who screened with moderate to severe symptoms of anxiety or depression, 70% reported that one of the top three things contributing to their mental health concerns was loneliness or isolation.

The prevalence of mental illness has a significant impact on the population. Although there have been major improvements in addressing the mental health crisis in America, our nation faces yet another wave of mental health hurdles. In a given year, one in five adults experiences mental illness. However, the unique circumstances of 2020 and the unknown repercussions we face after nearly a year of living through a global pandemic are cause for major concern. Mental health researchers are already anticipating that there will be “collective trauma” associated with the COVID‐19 pandemic. In the United States alone, the average rate of depression or anxiety since the start of COVID-19 is 32.12%.

Since April 2020, Louisiana, Nevada and Oregon all have seen the highest average rates in anxiety and depression levels. Over the course of the pandemic months in 2020, Louisiana saw an average rate of 36.94% for anxiety or depression. Over the same period, Louisiana residents also reported an overall increase of mental illness by 24.3% during that time.

With so many Americans affected by mental illness, lack of access to health care can often be a larger source of the problem. Only 41% of adults with a mental health condition received mental health services in the past year, and with an increase in pandemic-related job loss, 56% more Americans are left uninsured compared to pre-pandemic levels — resulting in fewer treatment options.

Many of the top states that experienced increased rates of mental illness this past year were also states with high unemployment numbers and therefore a lack of health care coverage. In our previous uninsured report, Nevada saw one of the highest overall increase in unemployed and uninsured residents and is now among the top states experiencing high stress levels through the pandemic.

While some state's rate of anxiety and depression was considered high on average during 2020, other states experienced higher increases in mental health over the course of April to December. Wyoming, Montana and New Mexico all saw significant increases of over 30%. Meanwhile, Massachusetts was one of two states that saw a decline in anxiety and depression during 2020. The state’s 5.8% decline since the beginning of the pandemic, could be a result of its access to mental health care and how well it provides care and its health insurance programs. QuoteWizard recently ranked Massachusetts as the top-ranking state for access to mental health care in the nation. 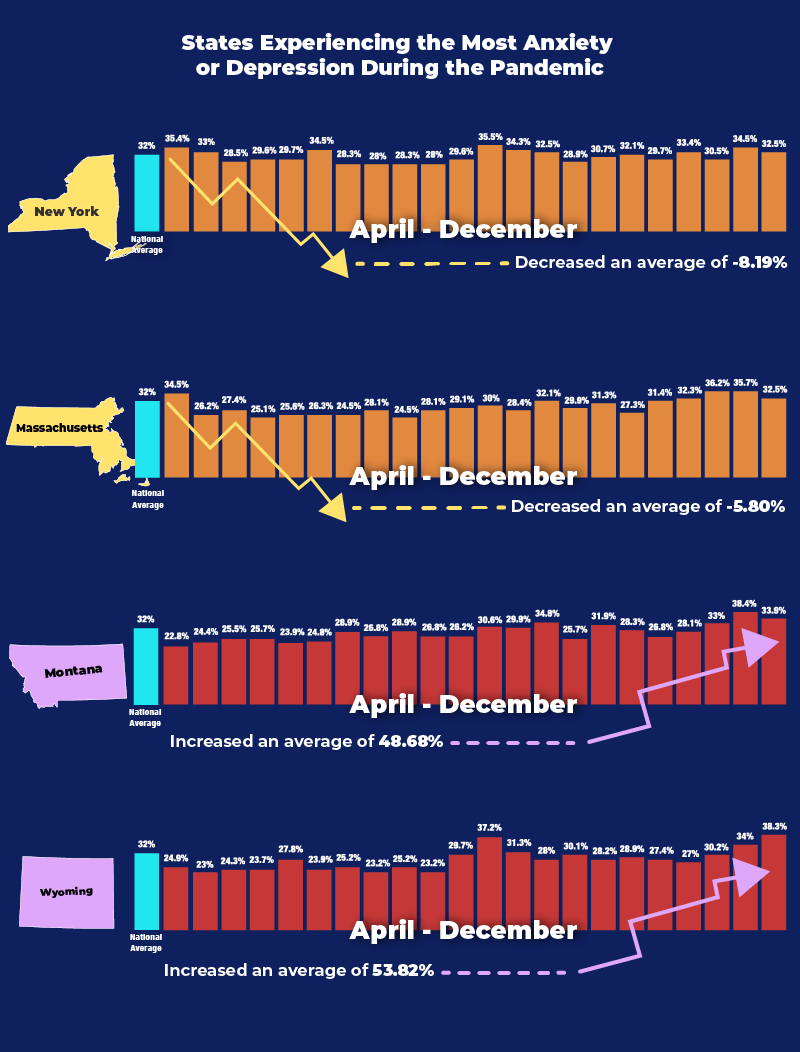 State Ranking on Adult Rate of Anxiety or Depression