Back to Top
Home

How Debt in Each State Changed During the Pandemic

Despite record unemployment and financially uncertain times, America’s struggle with debt showed signs of improving during the first year of the pandemic. Our team of analysts found that credit card scores improved, more people got caught up on their student loans and the number of people in debt collection has declined over the last year.

To get an accurate picture of how debt changed during the beginning of the pandemic, our analysts evaluated five key metrics. We then monitored how these metrics changed over an eight-month period from February 2020 to October 2020.

Debt during the pandemic

We found that Wisconsin had the largest reduction in their amount of debt, while Kansas had the smallest.

When we looked at all of the debt factors mentioned above, we found that Minnesota had the biggest change in their amount of debt and Alaska and Texas had the smallest. In Minnesota, credit card scores improved by three percentage points, the number of people in collections dropped by three percentage points, median debt increased by $27, student loan delinquency declined by 33% and credit card delinquency decreased by 73%.

Having a good credit score can affect everything from home mortgages and credit cards to what you pay for insurance and cell phones. We found that the number of people with subprime credit scores dropped by 3% nationwide during the first year of the pandemic. Mississippi and Maryland had the highest decreases in subprime scores. Vermont and Minnesota have the fewest residents with subprime scores.

When our analysts looked at the debt picture in over 3,000 counties, we found even more drastic changes. Median debt in parts of Montana, South Dakota, North Dakota and Texas is nearly $4,000 or more. And we found 10 counties where median debt increased by as much as 160% in just eight months. 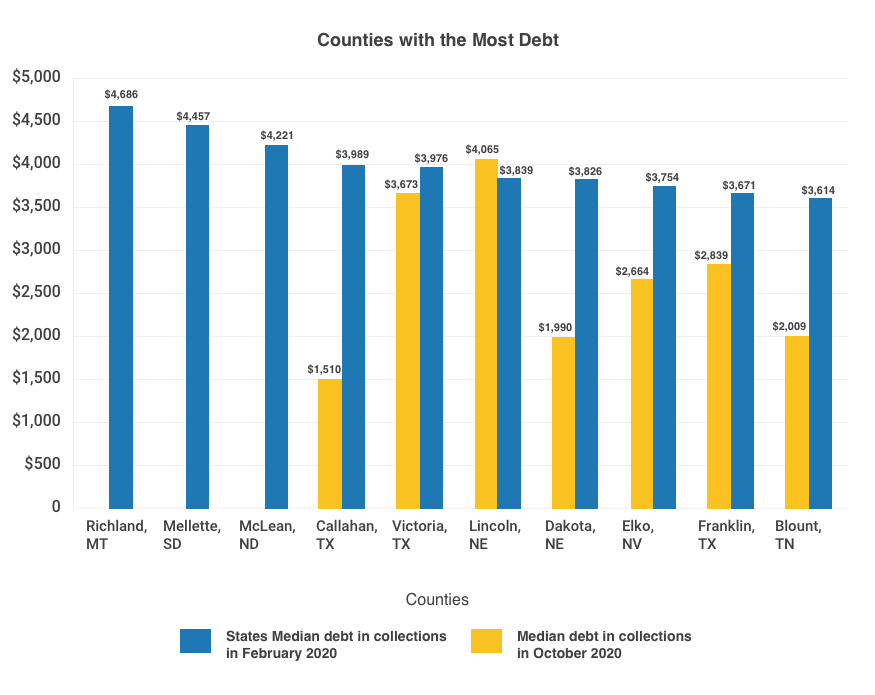 We found that while those debt indicators changed for people of color during the pandemic, they did not always change as much as in white communities. For example, Black communities had a 9% decrease in subprime credit scores and a 2% decrease in collections during the first year of the pandemic. White communities, meanwhile, had an 11% and 3% change, respectively. Native American communities experienced one of the biggest changes. The number of people with debt in collections dropped by 4% in Native communities and median debt dropped by more than $200.

We believe there are several main reasons why debt changed so much during the pandemic. One, lockdowns kept people at home. And with less money to spend on travel and entertainment expenses, Americans simply saved more. Two, the first round of stimulus payments was issued in March 2020. This put an extra $1,200 or more in people’s pockets that they could use for expenses or to pay off student loans. Finally, the United States experienced unprecedented job losses at the beginning of the pandemic. So, while the employed had extra money to pay off their debts, those who lost their jobs fell deeper into debt, leading to an increase in the median debt in collections.

Changes in subprime credit scores, median debt in collections, median debt and student loan delinquency were calculated using data from the Urban Institute. To calculate changes, QuoteWizard looked at 33 different debt indicators for all 50 states and 3,138 counties every two months from February 2020 to October 2020. We then compared those changes across each debt indicator for each state and location.

Student loan delinquency is defined as not making a student loan payment for 60 days.

Credit card delinquency is defined as not making a credit card payment for 30 days.