After a presidential debate, everyone loves to complain about what the candidates didn’t cover. It’s like the way people react to an awards show or “Best Of” listicle. And to us, the topic of healthcare at the opening Trump-Clinton debate looks a lot like Kendrick Lamar at the 2014 Grammys: conspicuously passed over. Unlike the Grammys, though,there hasn’t been much outrage over this omission.

The rising cost of healthcare and health insurance in America should have been a focal topic for Clinton and Trump’s first debate. Our healthcare spending is undermining the economy, bankrupting families, and literally killing tens of thousands of Americans every year. Premiums are expected to rise even more sharply in 2017. Major insurers like Aetna and Humana are pulling out of Obamacare exchanges across the country. The future of the Affordable Care Act is uncertain and human lives hang in the balance. American healthcare is a national embarrassment, and we deserved to hear what Trump and Clinton planned to do about it.

Instead, they talked about everything from fabric printing to beauty pageants. Mostly, they both just talked about Trump. Neither Trump nor Clinton brought up healthcare or health insurance once during the debates.

We learned more about the zip codes of Trump’s investments and his feud with Rosie O’Donnell than either candidate’s plan for healthcare. To recap, here’s a list of 10 things Trump and Clinton apparently thought deserved more attention than healthcare and health insurance:

OK, these definitely also deserve attention. Hillary’s opening statement is strong, and socialist-scented phrases like “profit-sharing” make it feel like we’ll be hearing “single-payer” drop any minute. Unfortunately, her opening was pretty much the only time she addressed any of these generic liberal wish list items, and healthcare never even made the roll call.

Trump: Mexico is making everything from our air conditioners to our cookies.

This is not only the second time Trump brings up Mexico in five minutes, it’s the second time he brings up air conditioners. Reminder: he didn’t say “healthcare” once. But you know what America is losing to Mexico besides its cookie contracts? The spending power of half a million Mexican immigrants living in California who go south of the border every year for medical, dental, and prescriptive services. Trump’s whole campaign is built on xenophobic trade relations. Maybe he should figure out how to compete with $15 doctor appointments in Tijuana.

Clinton: “Donald thinks that climate change is a hoax perpetrated by the Chinese.”

This is one of Clinton’s many zingers that make Trump look like a buffoon and give her fact-checkers something to dig for, but don’t really do anything in terms of outlining a policy plan or making campaign promises. Every politician throws around the phrase alternative energy at least once to look hip and forward-thinking but no one ever really moves on it. It’s kind of amazing that healthcare—which was the linchpin of Obama’s presidential campaign and a major part of Bernie Sander’s popular platform—didn’t even get as much lip service as windmills.

Trump: NAFTA is “the single worst trade deal ever approved in this country.” 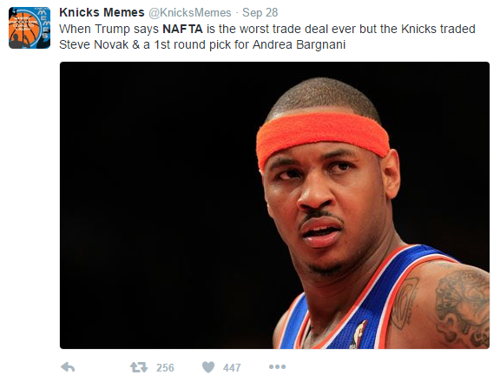 Forget the 2014 Grammys—this moment was more like the 2009 Video Music Awards. Trump interrupted Clinton multiple times to say how much he hates NAFTA. She wasn’t even talking about NAFTA. It was like watching Kanye West grab the mic from Taylor Swift: “Hillary, I’mma let you finish, but NAFTA was the worst trade deal of all time!”

Clinton: “We have taken the home page of my website, HillaryClinton.com, and we’ve turned it into a fact-checker.”

Again, Clinton would rather use her screen time—on TV and the internet both—to point out ways in which Trump is dumb. You know what would have been a better use of her webmaster’s time? Editing this absurdly redundant statement about a promise that could actually be really exciting:

You know what’s more interesting, and more accurate? Clinton’s first big job out of college was sitting on the staff of Nixon’s impeachment inquiry in 1974. Just a few months before, President Nixon had proposed his Comprehensive Health Insurance Plan (CHIP). CHIP would have been the most ground-breaking act of healthcare reform in America ever. In fact, it was widely speculated we were moving toward a single-payer system, and Nixon was working across the aisle to get it done. But once the Watergate scandal broke, his plan was scrapped, and his successor Gerald Ford wasn’t interested in Nixon’s commie healthcare plan.

In a way, you could say Clinton started her career taking down the crook who might have saved American healthcare. You’d think she’d be a little more interested in finishing what he started.

Clinton spent plenty of time speculating as to why Trump won’t reveal his tax returns. Maybe it’s because he doesn’t pay taxes. Maybe it’s because he’s “not as rich as he says he is.” Trump told the press they’ll have to pry those returns from his cold, dead, ring-encrusted fingers. On October 1, the New York Times leaked Trump's 1995 tax return, revealing that Clinton was probably right on both counts. It seems the press can do a pretty good job of digging into a candidate’s tax information. It’s too bad Clinton didn’t do a better job explaining what her plan for using those tax dollars might entail.

Trump spent some time crying about how airports like LaGuardia, Kennedy, LAX, or Newark are uglier than those in Dubai, Qatar, or China. Landing in America is like landing in a third world country, he says.

One could argue that our abysmal infant mortality rate is actually what makes us look like a third world country. According to the Washington Post, if Mississippi were a country, its infant mortality rate would land somewhere between Botswana and Bahrain. Alabama pulls in a little better than Mississippi but still slightly behind Lebanon. Airports aren’t the priority.

Trump: African-Americans and Hispanics are “living in hell.”

Trump’s misogyny matters, but the presidential debates should be about policy, not personality. They debated Clinton’s “look,” “stamina,” and “temperament,” alongside Trump’s abominable history of sexist remarks, for the last 10 minutes of the event. Maybe Clinton should have brought up the fact that 18 million people will lose their health insurance if Trump wins instead. Combing through someone’s past Tweets and media appearances for incriminating quotes is best left to the bloggers. Otherwise, bloggers will just wind up writing about how the candidates ignored the real issues. Like health care.

What the Aetna-Humana and Anthem-Cigna Mergers Mean for the Future of American Health Insurance
Why Health Insurance Rates are on the Rise and 10 Ways You Can Save
Supply Dwindles as Insurers Merge or Exit Health Marketplace
Are you paying too much for insurance? Find out with fast, free, quotes from top companies.

Stay on top of the latest auto, home, and health insurance news that affects you. Enroll to receive insurance updates straight in your inbox.